On The Go With Andile Phehlukwayo 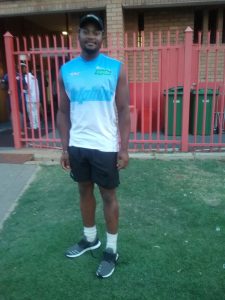 Cosmic Cricket caught up with Proteas and Hollywoodbets Dolphins seam-bowling all-rounder; Andile Phehlukwayo at SuperSport Park. They are playing the Multiply Titans in the Sunfoil 4-day series happening 20 to 23 October 2016.
Phehlukwayo caused quite a stir with both bat and ball during the recent tour of Australia to play against the Proteas. He also played his part in making cricket history; to be in the first team to achieve a whitewash in cricket.  Like an earthquake he ripped through the Australian line-up with David Miller to secure a critical win.
How did Phehlukwayo adjust coming from the Proteas five match ODI whitewash victory against Australia to the Sunfoil 4-day domestic series? A sudden change in pace.
“It was hard and difficult” Phehlukwayo responded. The last time he played a 4-day format match – was against Australia. “As a young player this helped me to adjust mentally”. He actually enjoys the 4-day format.
He said that this taught him “to not look for things”, but just play shots as they come. Playing 1-day format shots; cost him his batting aspirations today. Phehlukwayo made 19 runs; before Multiply Titans’s David Wiese claimed his wicket.
He added that the shorter formats built his confidence.
On the bowling side overall; Phehlukwayo was “happy” with his performance. He just needs to improve on getting his bowling length right. “It’s been a while since I bowled a red ball”: he said smiling.
How did it feel to enter international level, playing for the Proteas?
Smiling, he said: “it was a privilege and honour to play with South African greats”. Suddenly he was rubbing shoulders with some of his heroes. Was it intimidating?
“Not at all, the other players were welcoming and ready to share their experience and advice with me”. It was also an “eye-opening” experience for him. He said that he could express himself in a positive environment where the Proteas values are lived. It became clear that ‘Honesty’ ranked high in the Proteas squad.

He is ready for day two against the Multiply Titans; taking today’s lessons with him.
Friendly and professional; we’re going to see lots more of Andile Phehlukwayo.