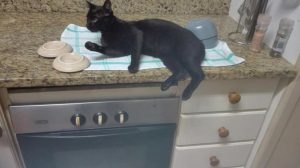 A call from a frantic motorist at night; saw several rescue networks scrambling to find help for a kitten who was found injured on the M7 freeway in Kwa-Zulu Natal, South Africa. A victim of a hit and run; the male kitten was hanging on for dear life.  Hit and runs mostly don’t have a happy ending.  Would this kitten beat the odds?

Thus started the actions that would change the course of Dobby’s life. It turned out that Dobby spent several days on the M7 before being rescued.

A ‘foster mother’ located close to the location collected Dobby from the motorist and took him home.  Within minutes she realized that his injuries were worse than initially thought – there was quite a bit of blood.  She contacted the rescue network to say Dobby needs veterinary assistance and fast. 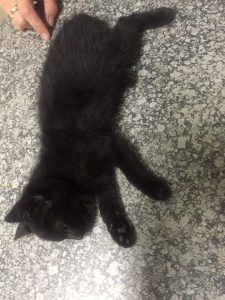 Due to the late hour – the ER Vet was her only option.  First to meet her; was Farrah Maharajh of Feed the Furballs NPO.

On further examination reports Maharajh: “He had fresh wounds that were bleeding and an older wound estimated to be 3 days old; that had severed his tail. We were asked to make a decision, there was possible spinal damage, none of us could confirm if his back legs were working. We opted to stabilize him. The foster took him home and first thing the next morning he would be admitted to our vet.”

Some good news between 02:00 and 03:00 am; the foster mother reported that there was function in Dobby’s hind legs. 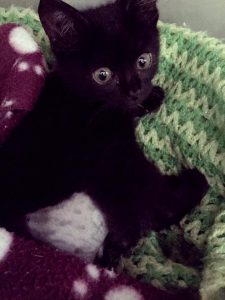 Dobby On His Way to Recovery – Photo by Farrah Maharajh

Fighting through the night – Dobby was admitted to the vet.  The stump of his tail bone was fractured and they needed to operate before the tissue started to rot and die.

Maharajh took the decision – Dobby must be operated on. Post operation he went from hisses to kisses.  “a complete turnaround, Dobby wanted to play and have his tummy tickled” said Maharajh.

Lots of tender loving care, a good diet and rest later; Dobby went to his new home and reported to be “as naughty as ever”.

For more info on Feed the Furballs; contact Farrah Maharajh on email address or visit their Facebook Page

Farrah Maharajh of Feed the Furballs will be at the KZNCC Top Cat show on 29 October 2016 and will be selling some feline and canine toys.

Come and support them and see some of KZN’s top felines competing for Top Cat 2016 honours. The show runs from 09:00 – 12:00 at the Minor Hall, Durban Jewish Club, North Beach