Multiply Titans vs bizhubHighveld: Battle of the Bat

It was an interesting day at the crease on day two of the 4-day Sunfoil match between the bizhubHighveld Lions and the Multiply Titans. 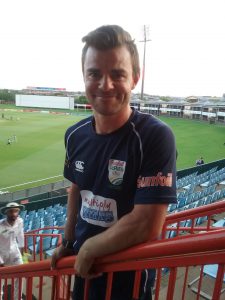 The Lions’s solid bowling attack gave them a further breakthrough when economical bowling by Sean Jamison claimed both the wickets of Grant Mokoena (30) and Farhaan Behardien (0).

The Titans regained some composure with a great batting performance by Captain Henry Davids who added 101 runs to their score for the day. Davids bounced back from his last two matches. He resumes batting with team-mate David Wiese tomorrow for day three of this clash.

To build a healthy lead;  the Titans cannot afford a further loss of wickets. The Lions are known to fight their way back.

Neither team are out of the woods yet and the match is a ‘free for all.’

Go and support your team at Senwes Park.  Four day format is all but boring.