Home after a hard training session with Titans Fitness and Conditioning Coach Diederick (Dicky) Kruger, watching my favourite program, an ad break came up. I smiled at yet another advertisement on how to stay and look young. 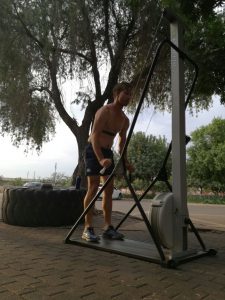 In speaking to female family members, friends and even strangers; I got a mixed reaction as to what “being 50” meant to them; in terms of physical activity, staying healthy and looking great.  Most were scared of aging.  For some (in jest); ’50’ meant standing with one foot on a banana peel and the other in the grave. The only way to looking ‘reasonably good’; were fad diets, media suggested beauty regimes or the extreme: plastic surgery or Botox.  Just look at the covers of popular women’s magazines or beauty advertisements on TV.

There are no quick lasting solutions. I tried most of them. It worked well for a couple of months and failed.  A warning from my Neurologist that I was on my way to a disabling stroke being a sufferer of the “dangerous migraine type”; I had to do something – and fast.

From non-energetic couch potatoe to fifty, fit and fad-free.

After asking Kruger’s advice on a good exercise and eating plan; he invited me to “come and try” the Multiply Titans’s gym.  One of the best decisions I made in 2016.

Imagine going from barely walking a flight of stairs; to brisk walking continuously for one hour with 15 kgs on one’s back or, having a quick heart recovery rate after completing a set of exercises.  For someone who couldn’t stick to an exercising regime or barely ‘survive’ 20 minutes of gymming (when I actually did) – I now train on average five consecutive days a week between 45 minutes to an hour.  Migraines, flues and general lethargy are problems of the past.

Training is now part of my life-style and yes, addictive.

Within two months I dropped several centimeters and kilograms that have not found their way back to its old places on my body.  No more see-sawing.  Just a healthy and safe way of shaping up.  I suddenly had energy and looked forward to my gym sessions.  Totally the opposite to when I trained at two well-known gym franchises. I was paying for something, I wasn’t using.  Does that sound familiar?

Persevering for the first three weeks at my new gym; was not easy.  My mind and muscles were in uproar after my first training session with Kruger’s fellow Fitness and Conditioning Coach; Devon van Onselen.  I never thought that four months later I would be writing this article. 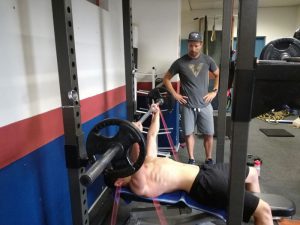 What made this so different from my previous gymming experiences?

Kruger and Van Onselen’s combination of training styles and methods gave me the best of both worlds.  No training session is the same and, they work to get the best performance from their clients.  It is not just the exercise, but also that they bring in the ‘psychological’ aspect of getting the best out of me on a bad day.

Incorporated in my training, were days where it was more a mental battle to reach my goal for a specific session than physical.  Kruger said that mental strength is important for when I want to achieve my dream of climbing the Nyiragongo Volcano and lava lake in the Democratic Republic of Congo.

Kruger and Van Onselen soon introduced me to the 4 steps of getting past the stage of giving up.

In the beginning I was stuck on point three, until that breakthrough where I wasn’t going to let the Turbo Bike get the better of me – 50 calories and all.

Kruger said that he trained me according to my goals, strengths, weaknesses and also to strengthen the areas that become risks in the aging process. He added that he trained me for any situation; be it gymming or doing a hike. For him it’s about individuality and not one regime fits all.

One thing I had to learn was; that there were going to be days that my body was going to tell me that I need to slow down and that I must listen to it.  Both coaches said that it is not a sign of weakness or failure, but part of the process of going forward.  Encouragement of “look where you started and, at what level you are exercising now”: changed my paradigm. I’ve been in better shape and fitness than I’ve ever achieved in the 10 years of on and off gym memberships.

Well-tailored training sessions, still keeping intensity; Kruger and Van Onselen ensured that my required muscles were worked properly without sustaining injury.  Quite opposite to my previous gym experiences.

During several training sessions the topic of older women and training came up.  Training is important; “especially today; where our lifestyle is fast-paced and demanding”; said Kruger.

An added bonus is; you get a taste of what a professional cricketer trains like.

If you are in the vicinity of SuperSport Park (home of the Multiply Titans) and one of your new year’s resolutions is to get fit and healthy; contact Diederick (Dicky) Kruger on 012 6631005.

Perseverance, will-power, and in my opinion the right trainer and gym will determine whether one gives up and accepts “one’s lot” (some women do) – that 50 means it’s all downhill from here.

Aging is a process – getting old is a choice.