THE MULTIPLY Titans came up trumps in a nail-biter CSA T20 Challenge beating the Warriors by six runs at SuperSport Park.

The Warriors won the toss and elected to field. 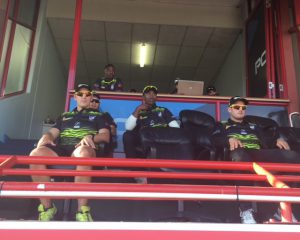 Kyle Abbott opened for the Warriors; bowling to Jonathan Vandiar who hit a boundary off his first ball. A bouncer flew past the wicket-keeper and added a further three runs to the over.

Heinrich Klaasen replaced Vandiar at the crease. Klaasen and Markram continued to add runs to the scoreboard. Klaasen looked for the boundary, but the ball didn’t carry the distance and he got caught by Qaasim Adams off the bowling of Colin Ingram.  The Titans were 69/2 in the ninth over.

Markram was settling into a good pace, when Ayabulela Gqamane struck and got this big wicket, dismissing him for 33 runs. The Titans were 76/3 after the 10th over.

The 11th over saw Skipper Albie Morkel reach his 1500 runs in T20 Challenge.

Morkel and Heino Kuhn reached the 100 run mark in the 13th over.  The Warriors kept their bowling tight. boundaries were hard to come by.

A miscommunication between Morkel and Kuhn in the 14th over saw Kuhn get run out by Lesiba Ngoepe (bowled Ingram). The Titans needed to put up a competitive score for the Warriors to chase.

Ingram struck again in the 16th over and took the wicket of Farhaan Behardien caught Colin Ackerman.

Skipper Morkel (21) on a good innings saw an opportunity to add more runs to the Titans’s tally and got run out by Walters bowled Sisanda Magala. the Titans were 128/6 after 18 overs.

David Wiese and Malusi Siboto got the Titans to 155/6 in their 20 overs.

Roles reversed, the Warriors came in to face the Titans’s attack.

Morkel and disaster struck in the first over. Just after Morkel dismissed Clyde Fortuin for a duck, a pulled  hamstring saw him leave the field. Captaincy fell on Wiese.  Behardien bowled the last ball for the injured Morkel. On watching the game from the sideline,  Morkel said: “It is worse watching the game from the sideline than from the field.” Smiling he said: “After this match, I won’t consider coaching.” and added “the win took some of the pain away.”

After the first over the Warriors were 5/1.

Wiese got the coveted wicket of Skipper Jon-Jon Smuts with Markram catching the ball. The Warriors were 16/2 after 3 overs.

Lungi Ngidi almost got Ingram, but a dropped ball saw Ingram survive till the sixth over; when Ngidi dismissed him for 12 runs with the help of Heinrich Klaasen. The Warriors were 44/3.

The Warriors’s Colin Ackerman and Christiaan Jonker took the bit between their teeth and took their team to 91 runs in the 12th over. Tabraiz Shamsi rounded off this over by putting an end to Jonker’s (33) innings.

The pressure was mounting for the Titans as the Warriors kept a consistent run rate eating away at the comfortable lead of the Titans.

Runs accumulating on the Warrior’s scoreboard and four overs left; the game could go either way.  One could cut the atmosphere at SuperSport Park with a knife. Teams, coaches and fans were on the edge of their seats.

Breaking some of the tension for the Titans; was Qaasim Adams being caught lbw by Shamsi in the 16th over. The Warriors were 125/5. They needed 31 runs to clinch the match.

Ngidi struck like a lava bomb taking the wicket of Colin Ackerman (34) in the 17th over.

The pressure was on Ngoepe and Magala to take the Warriors through. Magala got a six off Wiese in the 18th over.

The Warrior’s final over; they needed 12 off six balls.

Bowling the final over for the Titans fell on the shoulders of Malusi Siboto. Siboto kept his signature calm and kept to a tight over. The penultimate ball, nerves got the better of him and he bowled a wide. The Warriors needed eight off two balls. Wiese and Kuhn went over to encourage him. Siboto took a few seconds to regroup and rounded off the game with a tight last ball to take the Titans to a six run victory.

Catching up with Wiese; how did taking over Captaincy early in the match affect his game? “I was surprised, as there were more experienced players like Behardien and Kuhn in the squad.” “We worked together to get the best result”.  With pressure on and bowling the 18th over, what went through his mind? “We did the necessary exercise and hard work as preparation”: Wiese responded, and added: “the pressure was on the (Warrior’s) batsmen as well.”

What did Wiese say to Siboto? “I told him to enjoy the over”: and praised the Titans’s supporters: “Our fans were showing so much support, that is always good.”

Chris Morris supporting his teammates from the sidelines, on a close win had this to say: “I couldn’t control my bladder – I went back and forth. I’m a nervous and bad cricket supporter when it comes to my own team.”: he said with a huge smile.

CEO of the Titans Jacques Faul, delighted with his team’s win said: “I never want a close win like this again.” 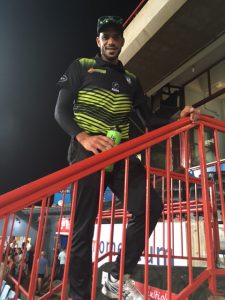 The cruelty of a T20 was evident in the response of Basheer Walters: “The game was bitter-sweet. We worked hard all season and in this match, but just two balls can change a game.” “We just needed one over with a senior batsman”: a disappointed Walters said.  The T20 Challenge over; what is the plan? “Spending time with my family” said the father of two boys of which the youngest is just seven weeks old. On fitness and diet, Walters grinned while responding: a sweet tooth “I love donuts and won’t give them up.” “I believe in hard work” as that gets him through and keeps him on peak performance.

About the Titans’s win Bilas said: “The Titans showed a lot of character. It’s times like this you believe that you can win”. “They did it.”