THE FINAL day of the 4-day Momentum Cup clash between the Multiply Titans and Buildnat Cobras is going to be exciting.

With one day to go, the pace may well turn into a one day format after the Cobras declared their 1st Innings.

The Titans posted a 1st Innings total of 195. The Cobras responded with 326/9 and declared.

At some point the Titans looked as if they were going to post a good score. Between Cobras bowlers Lizard Williams and Tshepo Moreki; they curbed the run rate of the Titans.

Justin Ontong explained this decision: “We want to force a result. This is our best chance to stay in the game.” He said that the Titans would also prefer a forced result. Both teams aim to be in the final. Ontong “loves the 4-day format.”

The ball is in the Titans’s court on how they will approach the task of clearing the deficit and post a target for the Cobras to chase. 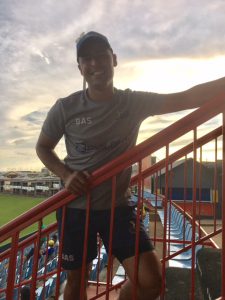 Ontong praised the young Jason Smith’s game. Ontong was glad to be there as a senior player to encourage him. “Migijima played well” he said and added that his 50s in matches were consistent.

Ontong scored 110 runs before being dismissed by Wiese who bowled a fast ball and Dean Elgar caught it. Smith made a respectable 69 runs.

Tight and aggressive bowling earned David Wiese a total of five wickets, followed by Rowan Richards with two wickets. Richards’s consistency and determination throughout this series added to the Titans’s success.

Openers Heino Kuhn and Aiden Markram took the Titans to 20/0, before day end.

Come to SuperSport Park to support your team. Will there be a result instead of a draw?