All-rounder and ‘Man of the Match’ Robert (Robbie) Frylinck; turned the final result at SuperSport Park between the Multiply Titans and Hollywoodbets Dolphins around in favour of the visitors. 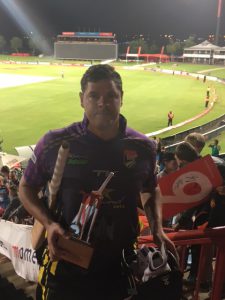 The Hollywoodbets Dolphins won the toss and elected to field. The Multiply Titans set a target of 324 runs for the Dolphins to chase.

Top performer with the bat for the Titans: Henry Davids put a respectable 87 on the board – before being dismissed  by  Mthokozisi Shezi.  Rivaldo Moonsamy (61) looked to capitalise even further off the bowling of Calvin Savage, but got caught by Sarel Erwee. Savage had a good innings with the ball; claiming four wickets for his team.

The Titans looked set to win their kick-off 1-day Momentum Cup clash against the Hollywoodbets Dolphins. The hosts had a solid 48-run cushion towards the end, but a couple of missed catches and untidy bowling ate away at their lead.

Top scorer for the Dolphins; Erwee made 70 runs before succumbing to the bowling of Junior Dala.

Morne van Wyk (61) not only celebrated with his bat, but also achieved two milestones: 500 runs in the MODC  format and 1000 runs against the Titans.

Commenting on his innings and achievements Van Wyk said: “I was surprised” and the two milestones were “a feather in my cap”.

On the result Van Wyk praised Frylinck saying that: “a special innings by Rob contributed to our win”. 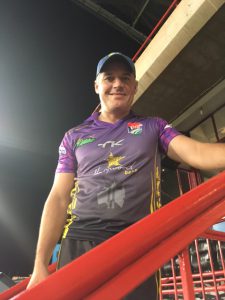 Morkel said after the match that one of the contributing factors to their loss was, conceding 20 runs in two overs and he was going: “to reflect in the dressing room” further. 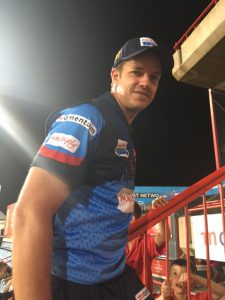 The Dolphins couldn’t eat away at their deficit. Keshav Maharaj got dismissed by Wiese on 38 runs. With six overs to spare and 259 runs on the scoreboard the Dolphins needed to pick up pace.

That’s exactly what Frylinck did. He made 50 runs off 19 balls of which six were boundaries and three – sixes. With an over to spare; the Dolphins needed a run to win.

A glimmer of hope for the Titans fans came in the form of Malusi Siboto, whose first three balls of the last over didn’t yield runs. Baited breath in both camps with three balls left; Frylinck saw the gap and hit the winning runs securing a five wicket victory for the Hollywoodbets Dolphins.

A delighted Frylinck said: “I train all the time for these type situations. I relaxed and remained calm”.  This for him: “came together nicely”