Over a year later that involved a 500 plus km move to Durban adding another cricket team (Hollywoodbets Dolphins) to the mix – I finally took to the keyboard.  So where was I? 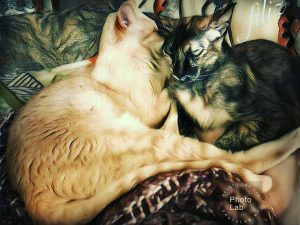 I STILL LOVE my Cricket Boys

At first I was not impressed with the fruitcake (my human), unceremoniously dragging us to a place with a giant water bowl.  Turns out, my new home is Durban with its beautiful coastline which I get to admire from my balcony.  Tuna, did someone mention tuna? Nah, my imagination ……..

Anyway, back to one of my favourite topics – cricket.

Just as I thought I got the gist of the MODC 4-day, MODC 1-day and CSA T20 series – they add the Mzanzi League.  Geez, talk about confused.  My favourite Titans and Dolphins players mixed up with other provinces.  Being a Durbanite, I naturally selected Durban Heat.

Things definitely heated up from the humidity to tempers.  Settling on the couch to watch my Durban Heat boys play in Paarl, mom Pretty suddenly developed eye problems.  Turns out; she couldn’t see our boys losing ……..  again.  She politely turned her back to the TV, as can be seen in the photo here.  This is my serious face!

I tried finding some explanation as to why a team with such a great line-up; is out of sync.  I even turned to science, but ‘Bell has no String Theory like cricket fans confused ?‍♀️‘.  I’m not going to single them out ….. yet.

I’ll let the dust settle, and see if my human can get me to a Dolphins vs Titans game later this season.  Maybe I can ask them “WTH???”

Madam stomped into the apartment with some mumbled words (something about heat, last over), dumped her bags on the bed and headed for the kettle to brew a big cup of tea.  Usually a good cuppa fixes stuff, but in this case; I think a stash of drugs in the best psychiatric ward would have worked better.

E(F)COM didn’t help much either.  Oh please, shoot me – as if your language is better.  This load-shedding nonsense …..  Short end of this story is, mom Pretty and I couldn’t exactly see for ourselves what madam’s mood is all about.  Don’t mess with logical creatives!
We got some glimpses of the match.  Channel hopping between SABC3 and documentary channels that is once the power came back on. Hold that thought, and let’s rewind to Wednesday. I have a bone to pick with Network and Krypton (Photo below).  They got some inside info.  I don’t believe they were stuck in the parking lot of the home of the Dolphins – Kingsmead Stadium.  They just revealed too much info. 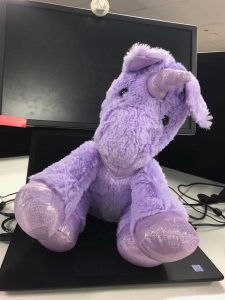 Turns out madam ended up in Durban Heat’s (DH) cricket dressing room to which these two were not invited.  ‘Excuse’: Krypton could still be explained, but a purple unicorn in a tough guys’ dressing room, would look out of place.  Ya, right.

So how did she end up there?  Thanks to the wonderful marketing ladies; Kat(herine) (then most think cats are impersonal? pfff) and Nana AND Coach Morgan for making madam’s dream come true.  The cherry on the top were the purple couches.  “Super retro”; I believe.  Network commented on the purple being a match for him.  If you wondered about a purple unicorn, you got your answer ………… Pretty much anything purple is a must for madam.  That’s Creatives for you.  On a planet of their own. Must have been hard to get her away from the couches. teeheehee  Poor Coach Morgan got a project plan in passing as well. Typical.

Everything was cool, plain sailing till Friday evening which brings us back to ‘the mood‘.

Cup of tea in hand, settled on the couch and VH1 softly playing in the background; she started to unpack on WhatsApp.  The whole; cricket post mortem and ‘how was your week’ thing.  Friday was a whole week on its own for madam.
My DH boys had it all in hand.  The odd slip-up here and there, but kept it tight and were headed for a sure win.  Lo and behold, Mr Pongolo got a cosmic shock of sorts and knocked two sixes out of nowhere, and kaboom, there went the match.  Jozi Stars?  Cosmic Conspiracy?
I’m logging a case file with theblackvault.com (really cool site). C’mon; Paarl Rocks versus the Jozi Stars at Newlands in the final and Oumuamua just happens to be in the news at this time.  Translates good to the Paarl Rocks; me thinks.  Just too coincidental, don’t you think?
‘Coach Morgan’, we have to talk about a name change for next year.  Seems names with a stellar connection just happens to do well.

Talking of ‘rocks’ –  Madam’s off to research the latest on the Oumuamua asteroid that’s doing the rounds.  She wrote about it several months ago.  Paarl Rocks????!!!! Anything to fess up?

There should be a freaking moratorium on naming anything after weather phenomena.

So madam took her Cumulus Gel running shoes for their first run tonight.  Barely done, the clouds appeared from nowhere.  I bet half the running community were out tonight.  Hey, Asics!!!!!!  Nice! 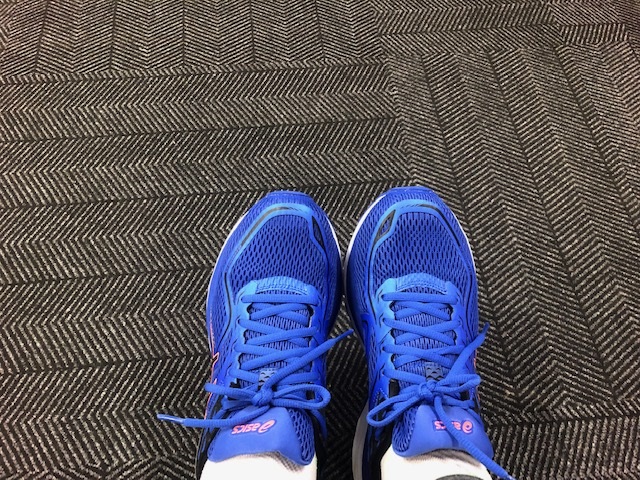 Lo and behold, we got all the versions of the cumulus cloud.  From Cumulo Congestus to Cumulonimbus.  Thunder and lightening claimed the sky in close proximity of our abode.

At the crucial scene in one of my favourite TV series (CSI) – ‘poof’ the picture display changes to a ‘signal sorry story’.  Maybe, Hawaii Five-0 should be called in to investigate the ‘coincidence’.  Bring in Jerry Ortega – he understands conspiracies.

I went to the balcony door and shouted at the display outside to turn down the volume.  Jeepers Creepers; next thing a lighting bolt struck too close for comfort.  Actually several.

I’m by classification a brush-coat Peterbald, but that may need to change.  The bolt scared the crap out of me.  My coat is now the straight-coat version of a Brazilian Blow Wave.  I’ll give it a few hours and see if my coat returns to normal. 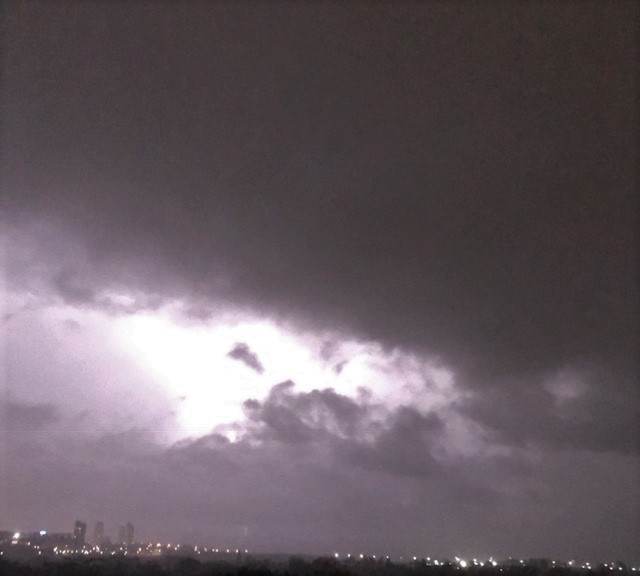 Time to go and calm my raw nerves.