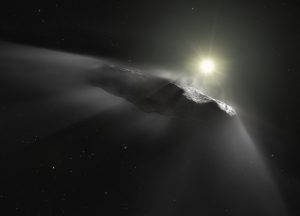 OUMUAMUA 1I/2017 U1 made its way back into headlines after causing a stir in the astronomy community last year, when it fleeted through our solar system.

A stellar object from another planetary system; Oumuamua captured the attention of many a scientist and Unidentified Flying Object (UFO) aficionado after it appeared in our solar system November last year.

From a scientific viewpoint; this alien object was thought to be an asteroid, while from a UFO study perspective; it was seen as an alien spacecraft. The latter still open to speculation, until proof is found to substantiate this claim.

Focusing on the scientific aspect – Oumuamua was classified as an asteroid at the time.  Using data (ground and space-based) gathered from this fleeting encounter; new information came to light.
Dr Marco Micheli from the European Space Agency (ESA) and some of his colleagues concluded that this was a comet and not an asteroid as initially thought.

Unlike our solar system where asteroids are driven by the gravitational attraction of the sun and planets; Oumuamua moved away from the sun.  It became evident that it was driven by non-gravitational acceleration.  Not displaying typical characteristics of a comet, the weakness of the emission and being from another planetary system; Oumuamua made it difficult to classify it as a comet.  Results of this analysis can be found in the June 27, 2018 publication of Nature: International Journal of Science.

On another front; Search for Extraterrestrial Intelligence (SETI) is doing more studies to see if they can pick up any further signals from Oumuamua; following some feedback using intricate technology.

This may not be the first of such encounters with alien objects from other planetary systems.
We can expect more of these alien encounters, which hopefully will give us a glimpse into the vast galaxy beyond our solar system; of which scientists have only scraped the surface.