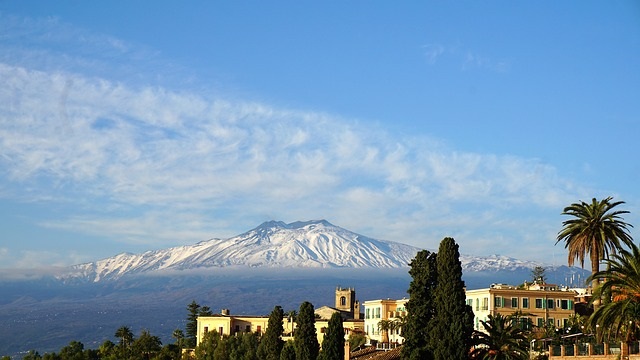 MOUNT ETNA started spewing ash and lava after creating a new fissure high up on its southeastern flank on December 24, 2018.

In the wake of the Indonesian tsunami caused by an underwater landslide at Anak Krakatau; Etna made its own headlines today, when several tremors sent seismograph needles translating what is happening at the volcano.

The Etna Observatory, part of Italy’s National institute of Geophysics and Volcanology (INGV) explained that it could “possibly be a result of magma moving through the crust”.

Due to the activity taking place high up its flank; it didn’t pose a threat.  However, Etna is being closely monitored.

Catania Airport was closed to avoid planes getting caught in the ash at the time, but was later re-opened.

Declared a UNESCO world heritage site June, 2013, Etna said to be the highest active volcano in Europe, and one of the largest and most active in the world; is reportedly moving towards the Sicilian sea at a rate of 14mm a year.

In a previous interview (2010) with Salvatore Caffo – Chair Volcanologist of Etna Natural Park he gave me an exclusive glimpse into the many features of Mt Etna.

Situated north-east of Sicily; Mt Etna is the largest European volcano covering over 1260 square kilometers. Being an active volcano – Etna is being monitored closely for any change in its general pattern.

A popular tourist destination – Etna completes the beautiful Sicilian landscape hiding its true nature under lush green vegetation and a seemingly quiet slope. Just underneath is a hype of volcanic activity.

Etna was born about 600 000 years ago when the African Lithosphere plate to the south collided with the European-Asian plate to the north. This caused fragmentation of the earth’s crust and created a mosaic of almost stable micro plates from which Etna arose to the south.

Etna’s geologic make-up is unique to that of other volcanoes. How?

“The presence itself of the volcano in the geodynamic setting related to the eastern part of Sicily is absolutely unique, as the features of the source and of the original magmas appear as being extremely similar to the ones of volcanoes forming in the oceans as submerged sea mounts and islands; whereas Mount Etna has grown on continental crust at the intersection of major fault belts and at the front of a complex south-verging mountain range.”

The earliest reports of Etna was penned in a poem written by Publius Vergilius Maro about 100 BC.

“Here, while from Ætna’s furnaces the flame
Bursts forth, Enceladus, ’tis said, doth lie,
Scorched by the lightning. As his wearied frame
He shifts, Trinacria, trembling at the cry
Moans through her shores, and smoke involves the sky.
There all night long, screened by the woods, we hear
The dreadful sounds, and know not whence nor why,
For stars are none, nor planet gilds the sphere;
Night holds the moon in clouds, and heaven is dark and drear”